In the summer we had the wonderful Alice with us on a work experience placement. While here, Alice took a look at Greek myths and the impact these have had on language and translation.

After having spent my summer holidays in Crete, supposedly the island of Zeus the God of the skies’ birth, I decided to pick up a collection of the Greek myths. At first I simply enjoyed reading the myths whilst being surrounded by the idyllic scenery where many of them were said to have taken place. After finishing the book I began to notice how so many of the characters and stories have stood the test of time and have a resounding presence in our society today. 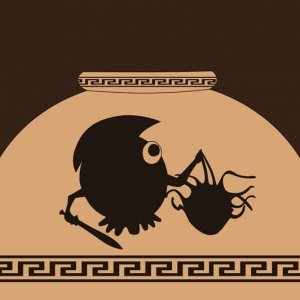 Perhaps the most interesting to me is the impact of the myths on modern languages. In Greek mythology the Fates were three sisters: Lachesis (lot), Clotho (the spinner), and Atropos (literally ‘without turn’ or metaphorically the ‘inevitable’) whose job it was to monitor the thread of life. Lachesis allotted each man a length of the thread of life, Clotho spun the thread and Atropos cut it. No one, including Zeus, could change their minds. From this example of Greek mythology we not only get the word ‘fate’ meaning the development of events outside a person’s control, regarded as predetermined by a supernatural power but also the word ‘cloth’, a material made by weaving or spinning.

The word ‘echo’ also comes directly from a tragic Greek myth. Echo was a beautiful nymph who distracted Hera, the wife of Zeus, by telling her intriguing stories whilst Zeus was ‘visiting’ other nymphs. Soon Hera caught on to what Echo was doing and in the typically harsh manner of the Gods cursed Echo to only be able to repeat the last words that another person just said, meaning that Echo could no longer tell her stories.  Another very relevant word derived from Greek mythology is of course ‘Atlas’ meaning a collection of maps. This comes from the tale of Atlas whose punishment for siding with the Titans in the war against the Olympians, was to hold up the heavens on his shoulders for all time.  Not only have the names of Greek myths’ most important figures infiltrated the English language but also other modern languages with many of these words being the same.

One of the most well-known and most frequently translated collections of myths is Homer’s epic poem: the Iliad. In this lengthy work Homer tells of the victories of great mythological figures during the Trojan War such as Odysseus and Agamemnon and *spoiler alert* the tragic death of Achilles, by way of an arrow to the heel. There are hundreds of English translations of these poems making it difficult to know which one to read however this gives the reader real variety and has made the Greek myths accessible to many audiences.

Homer’s original text was full of beautiful imagery and sound effects which bring the events of the poems to life. However this complex descriptive language has presented its challenges when being translated, resulting in there being many different styles and forms of Homer’s poems. If you want you get to the heart of the action without having worrying about Homer’s elaborate descriptions then there are translations which offer more of a beginners guide to mythology in prose form. For the real mythology buffs out there, there are versions which offer a closer reflection of Homer’s poetic talent such as Richmond Lattimore’s 1951 translation of the Iliad. This version along with other poetic translations is considered to be more faithful to the original text as it is written as Homer had intended – as a poem. For a more modern translation of the Iliad Caroline Alexander became the first woman to publish a translation of Homer’s the Iliad in 2016.

However you chose to read these myths, the stories and their meanings remain the same. The Greeks used these tales to offer explanations for the creation of the world, natural events and the way things and people behave. The Greek myths have remained popular because despite the extreme wrath of the Greek Gods (examples of punishments given out by the Gods include having crows pluck at your insides and pushing a boulder up a hill for all eternity) they contain moral messages much like the fairy tales of the Brothers Grimm. They offer comedy, drama, romance and tragedy (no wonder why Shakespeare took so much inspiration from Greek Mythology) which remains relevant and entertaining today. The translation of these myths into many languages has made the influence of myths on so much of modern society in the form of language, art, science and literature undeniable – and these are just the Greek ones!