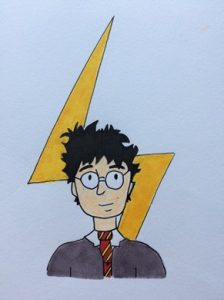 Today we take a look at Harry Potter and the translation of these books. This collection of 7 novels (known as a “heptalogy”, which sounds a lot like hepatology, which is what liver doctors do) chronicles the adventures of three young wizards at Hogwarts School of Witchcraft and Wizardry. Harry Potter and his friends Hermione and Ron are the good guys. The baddie is Voldemort (the T is silent, by the way). Voldemor(t) plans to rule the world and rid it of “muggles” (those who do not possess magic powers – so that’s likes of you and me). According to legend, only Harry Potter possesses the wizardry to defeat Voldemort. And so battle commences.

J.K. Rowling published the first installment, “Harry Potter and the Philosopher’s Stone”, in 1997. It was allegedly rejected by 12 publishing houses before Bloomsbury picked it up in the UK – rumour has it that Rowling had the rejection letters framed and hung them in her home.

“Harry Potter and the Philosopher’s Stone” has been translated into at least 70 languages and the heptalogy has so far sold more than 500m copies worldwide, securing Rowling’s place on the Sunday Times Rich List. In 2016, her fortune was estimated at £600m. Not a bad response to a dozen “No thank you” letters. But the translation of these books was a far from easy feat.

The translators could not start work until the English editions had been first been published. Then, they were tasked with adapting the content that was peppered with British references, invented words, and even invented songs/games (“Anyone for ‘Quidditch‘?). They had to fit the language and culture of their target readership without detracting from the style and flow of the novel. Before all of that, the linguists had to be confident enough in the English language and its culture to accurately identify which words were invented, and were not simply words taken from Old English. As a native English speaker, it is not uncommon for me to discover new English words, despite my many years of ‘Englishocity’ (I made that one up, hope it flies). Translators worked around the clock to produce their versions. When “Harry Potter and the Order of the Phoenix” (the longest in the series at 870 pages) was published in America, it took just one month for the first official Vietnamese translation to appear.

The fantasy genre is loved by children and adults alike. It appeals to all because of its pure escapism, taking the reader far away from the routine of ordinary life, yet still allowing them to apply their own moral code to an alternate existence full of magic and wonder. One of the reasons given when the book was originally rejected was that children’s books are not as lucrative as adults’. Perhaps the reason for its ultimate huge success is that we are all still children at heart. Who doesn’t love magic?

Novels in Translation: A Christmas Carol

A Christmas Carol by Charles Dickens We all know...

Today we take a look at Harry Potter and...

I was born in the month of Halloween. I’m...