On Friday morning our PM Gabi brought in some yummy chocolate cupcakes and introduced to us a Slovak tradition with a lovely treat for each of us. 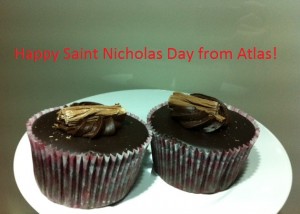 In Slovakia and many other European countries, the St Nicholas Day tradition (Deň Svätého Mikuláša in Slovak), on 6th December, is a festival for children, related to surviving legends of the saint, and in particular, his reputation as a bringer of gifts. The American Santa Claus, as well as the British Father Christmas, derive from these legends.

Traditionally in Slovakia, on the eve of St. Nicholas, children would polish their boots and leave them on a windowsill or doorstep. In the morning they hoped to find a nice treat inside, and not the dreaded coal for those who behaved badly! Traditional treats included fruits, nuts and most importantly sweets. In some villages, St. Nicholas (Svätý Mikuláš) arrived in a horse-drawn coach, along with an angel (anjel) and the devil (čert) who rattled a chain.

Through the centuries, many stories and legends have been told of St. Nicholas. Obeying Jesus’ words to “sell what you own and give the money to the poor,” Nicholas spent his entire inheritance to assist the needy, the sick, and the suffering. He dedicated his life to serving God and was made the Bishop of Myra as a young man. Bishop Nicholas became known throughout the land for his generosity to the those in need, his love for children, and his concern for sailors and ships. He gave his gifts late at night, so that his identity would remain a secret.