The arrival of little George Alexander Louis (otherwise known as His Royal Highness Prince George of Cambridge) captivated millions last month. As soon as he jumped onto the front pages, we waited with bated breath to hear what name he would be given. The naming of a baby is an important step in welcoming a child into the world, society and their new family unit. However, this process and the traditions associated with it vary across different cultures, some examples of which can be found below… 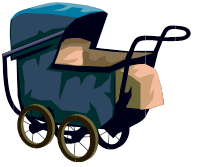 African societies place huge importance on the choosing of a child’s name, since it is often viewed as playing a fundamental role in an individual’s spiritual wellbeing and their subsequent success in life. Traditions obviously differ among Africa’s diverse communities, but the parents’ hopes for the future of their new baby and current events of importance are recurring themes when it comes to selecting a name.

For example, the Yuruba people of Nigeria will usually hold a naming ceremony (or ikomo in Yoruba) on the eighth day of a child’s life. Yoruba names hold much meaning and are often contractions of whole sentences embodying circumstances of birth, history, family, religion, or other equally pertinent facts relevant to that particular individual bearing the name. Abegunde, for example, is a boy’s name signifying “born during a holiday”.

In China, many families also like to select names for their children which draw links with future happiness and prosperity. Names can represent anything from nature, the environment, or mystical qualities but after the birth, parents will often choose a “milk name” (typically employing diminutives or doubled characters) before the family have settled upon a formal name. The milk name may not be used once the child enters formative years, but is often continued as a form of familial nickname.

Traditionally, a superstitious custom frequently associated with this notion of milk names involved selecting plain, ugly or meaningless names to trick evil spirits into overlooking the children, therefore protecting them from harm. Another long-standing Chinese tradition connected with the arrival of a new baby (or sometimes a first birthday) is the presence of red eggs at the family celebrations, the colour red symbolizing good fortune in Chinese culture, and eggs fertility or a new start.