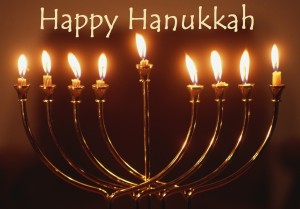 Happy Hanukkah 2012. Hanukkah lasts for eight nights, starting on the 25th day of Kislev according to the Hebrew calendar, which is usually sometime from late November to late December. This year it’s 9th to 16th December.

Hanukkah is the ancient Jewish festival of light. The festival dates back 2,500 years to when Antiochus (who was the King of Syria at the time) wanted the Jewish people to worship Greek Gods. Antiochus built a statue of himself in the temple and the Jewish people were forced to kneel before him. Some of the Jewish people rebelled and a 3 year war followed. Eventually the Jews won and reclaimed Jerusalem from the Syrians.

Even though the war had been won the war the temple had been destroyed. The people rebuilt the temple and dedicated it to God by the lighting of a lamp. They only had enough oil to light the lamp for one day but it burned for eight.

Since then it is traditional to light a candle on a special candelabra (a Menorah or Hanukkah) on each night of the festival, progressing to eight candles on the final night. This candelabra/Menorah usually consists of 9 branches. The ninth branch (a shamash), usually above or below the rest, is lit first each night for the purpose of lighting the others.