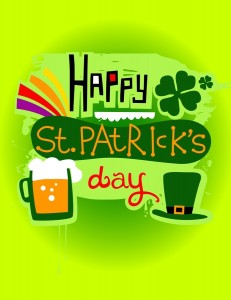 Today, all around the world, Irish nationals and descendants will celebrate Saint Patrick’s Day. St Patrick lived in Roman Britain during the 4th century from AD 385 to AD 461. St Patrick’s Day traditionally marks the birth of Christianity in Ireland, but in modern times is more of a celebration of Irish culture, music and drink!

Born into a wealthy family in mainland Britain, in his teens St Patrick was kidnapped by Irish raiders who took him to Ireland, where he was enslaved and worked as a shepherd. During this time, Patrick found God, who aided his escape by directing him to the coast where a ship would be waiting for him. Patrick became a priest and returned to Ireland to convert the largely pagan population to Christianity. He died on 17th March and is buried at Downpatrick. His legend grew and he became the patron saint of Ireland. 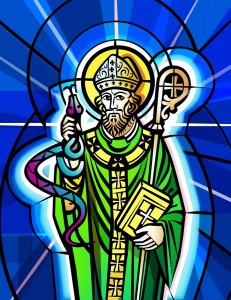 Irish cities such as Dublin, Cork, Belfast, Derry and Galway hold parades. Since becoming more of a cultural festival, the Irish language is also promoted during Seachtain na Gaeilge (Irish Language Week). Clad in green and wearing shamrocks, people will celebrate in cities across the world. In London an annual parade is held in Trafalgar Square to mark St Patrick’s Day. Large celebrations are also held in Manchester, Birmingham, Liverpool and Glasgow. In Newfoundland in Canada, and the tiny Caribbean island of Montserrat, St Patrick’s Day is a public holiday owing to the large number of Irish descendants in these places. Other parades are held in countries such as Russia, South Korea, Malaysia and Japan. Due to the large population of Irish descendants in the USA, most large cities have celebrated St Patrick’s Day since the late 18th century. In fact, there has been an annual parade on this day in Boston since 1737, and the parade in New York City is the largest St Patrick’s Day parade in the world.

Do you celebrate St Patrick’s Day? We’d love to hear from you!