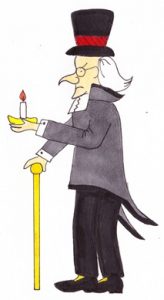 A Christmas Carol by Charles Dickens

We all know the story of ‘Scrooge’, a mean and bitter man, the protagonist in the novella “A Christmas Carol”. The story is set on Christmas Eve in London, 7 years after the death of Ebeneezer Scrooge’s business partner, Jacob Marley. That night, Scrooge, who passionately hates Christmas, is visited by a series of ghosts. Marley’s spirit is cursed to wander the earth weighed down by heavy chains, a physical representation of a lifetime of greed and selfishness. Marley warns Scrooge that he will be visited by three more ghosts over the coming nights. He explains that they will offer him the opportunity to alter his fate.

The first of these spirits is the Ghost of Christmas Past. It reveals scenes of Scrooge’s childhood, reminding him of a time when he was kinder and more innocent.

The second, the Ghost of Christmas Present, transports Scrooge to several different and happy scenes including one that introduces him to the crippled son of his accounting clerk, Bob Cratchit. The boy, Tiny Tim, is full of simple happiness and goodwill despite being seriously ill.

The third spirit, the Ghost of Christmas Yet to Come, shows Scrooge a Christmas Day in the future. The scene involves the death of a “wretched man” who is hated by everyone and whose end seems a cause for celebration.  The deceased is in fact, Scrooge himself.

Stunned by what he has witnessed and how his story could end, Scrooge begs the ghost to change his fate. He promises to renounce his selfish and greedy ways, and become a kinder, warmer and more charitable version of himself. By the end of the story, Ebeneezer embodies the spirit of Christmas. The final line reads “God bless us, everyone!”.

Dickens wrote this quintessential Christmas story in December 1843 and in a move not too far removed from the character depicted in the book, he sought a percentage of the profits rather than a lump-sum in the hope of making more money from it. He funded the publication personally after falling out with his publisher. However, high production costs left Dickens with much lower profits than he had hoped.

Despite this, A Christmas Carol was met with huge critical acclaim. The London literary magazine, Athenaeum, declared it: “A tale to make the reader laugh and cry – to open his hands, and open his heart to charity even toward the uncharitable … a dainty dish to set before a King”.

A Christmas Carol remains popular today, having never been out of print. It has existed in every media format, from stage plays to movies as well as radio and opera. Dickens has even entered the digital era, as it is available on e-book. It is the most translated Christmas story that isn’t directly associated with directly with religion and is celebrated everywhere with a global appeal that has influenced films such as “It’s a Wonderful Life” and “How the Grinch Stole Christmas”. Films we have all watched on Christmas Eve.

Dickens wrote this novella in the wake of the Industrial Revolution in England and it highlights the plight of those living in poverty. The idea of Christmas as a time for charity, compassion and goodwill to all appealed to readers everywhere and continues to do so to this day.

The phrase “Bah Humbug!” used by Ebeneezer Scrooge  to dismiss the idea of joy and merriment at Christmas has now entered the English language as a hallmark of the misanthrope. Indeed, the term “scrooge” is now defined as “a miserly person” by the Merriam Webster Dictionary.

The phrase “Merry Christmas” was popularised after the publication of A Christmas Carol and according to the historian Ronald Hutton, Dickens’s vision is responsible for the current format of Christmas itself: the family reunions, the generosity and compassion, all borne out of A Christmas Carol.

Merry Christmas to you! We hope you’re able to take some time to wind down over the festive period (if you celebrate it). Just to remind you, the Atlas Translations office will close at 1PM on the 24th December and re-open on Thursday 2nd January 2019.