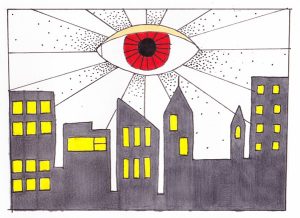 1984 by George Orwell occupies sixth place on The Editor’s ‘Modern Library 100 Best Novels’ and came eighth in the BBC’s survey The Big Read. This hugely acclaimed dystopian fantasy was published in 1949. It has been translated into at least 65 languages. Set in the future in “Airstrip One” (formerly Great Britain), a province of superstate “Oceania”. The hero, Winston Smith, labours in a climate of oppression. It is a time of 24-hour surveillance and public manipulation under the all-seeing eye of the leader “Big Brother”.

Here the population live in fear of letting slip any hint of free-thinking or individualism. Smith’s job at The Ministry of Truth is to rewrite past newspaper articles so that the historical record always supports the doctrine of The Party. Not only does The Party control Oceania’s history, it also controls its very language. This is through ‘Newspeak’, attempting to prevent any form of public uprising by omitting all terms relating to rebellion.

The novel tells the story of Winston’s determination to overthrow The Party, his affiliation with an underground organisation known as the Brotherhood. The novel also features his covert love affair with a co-worker, Julia, who shares his hatred of The Party. It is a story of resistance, resilience, betrayal and ultimately acceptance.

The infamous Room 101, where Winston is taken once his “thought crimes” are detected. This was inspired by Orwell’s personal fear of rats. In the novel, Winston’s is tortured by rats that gnaw at his flesh. In reality, Room 101 itself refers to a conference room where Orwell had to sit though tedious meetings when he worked for the Ministry of Information (inspiration for the Ministry of Truth). The term ‘Room 101’ is now used as shorthand for one’s worst fears or pet-hates. Whether being eaten alive by hungry rats or sitting through a three-hour meeting on a Monday morning. Another phrase popularised by 1984 is the ‘thought police’ although this actually originated in Japan a decade before the novel was published.

Such was the impact of 1984, that the term Orwellian has passed into the English language as a way to describe the actions of an over-bearing and over-powerful state, with no regard for the rights of the individual. Had Orwell written under his real name, Eric Blair, we might today be using the term Blairite instead.

Today there is a CCTV camera outside Orwell’s former home, positioned directly beside a plaque that reads ‘Big Brother is Watching You’.