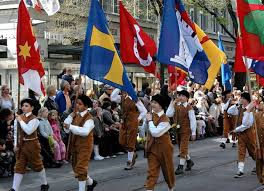 One of our Swiss suppliers has just been telling me about a really interesting Swiss festival to mark the beginning of spring, so I thought that I would share it with you!

The Sechseläuten is a traditional spring holiday in the Swiss city of Zürich and although it is not a public holiday many businesses do close for the day.

The tradition is to build a straw snowman (or Böögg) and fill it with pyrotechnics and fireworks. It is then burnt to welcome the start of Spring. Local guild members on horseback in traditional costume parade through the city and thousands of spectators line the streets along the route, to the “Sechseläutenwiese” in front of Zurich’s opera house.

In the evening a bonfire on which the Böögg (a snowman to symbolise winter) is stood and set alight. The theory is the faster the fire explodes the Böögg’s head, the warmer and sunnier the coming summer will be!

Sechseläuten was originally on the first Monday after the Spring equinox, the holiday was moved in 1952 to a Monday in mid-April (generally the third). Festivities begin on the Sunday before.