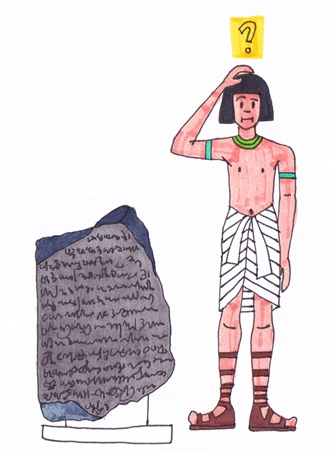 The Rosetta Stone is a stele from ancient Egyptian times that was key to deciphering the hieroglyphic language used by Egyptians at that time. It is thought to be one of the most important Egyptian artefacts ever to be discovered. It is particularly important in the world of translation, because the Rosetta Stone displayed a decree in three scripts; hieroglyphic and demotic, which were used by both ancient Egyptians, and ancient Greek. After its discovery by French soldiers in 1799, the Rosetta Stone has been kept in the British Museum in London since 1802.

History of the Rosetta Stone

The Stone is believed to have formed part of a decree celebrating the coronation of Ptolemy V, an Egyptian pharaoh. It was created by a group of priests in Memphis in 196 BC. Ptolemy V became king at age five after the murder of his parents, although the stone was made for his coronation when he was 12 years old. The stone is not complete – various parts of it are missing, and the original stone would’ve been significantly larger.  It is made from black granite.

During the Napoleonic campaign in Egypt in the late 1700s, French soldiers were tasked with strengthening the defences of Fort Julien, near the city of Rosetta (modern day Rashid). One of these soldiers, Lieutenant Pierre-Francois Bouchard, discovered the stone. He and his commanding officer immediately realised the stone could be significant in studies of ancient Egyptian languages. Soon, Napoleon himself was informed – he had placed great importance on scientific discoveries during the campaign.

By 1801, the French were nearing defeat against British forces in Egypt. Jacques-Francois Menou, a French general, was in charge of the stone and other artefacts discovered during the war. His depleted army travelled to the coastal city of Alexandria, where they were besieged by the British. By August 30, Menou and his forces had surrendered. He tried to keep the artefacts out of British hands, but the British army refused to relieve the city until they were handed over. The French threatened to destroy the artefacts, and Menou tried to claim the stone as his personal property.

However, the British would not accept this and by February 1802 the stone had been transported to the UK. Prints were created so scholars could attempt to translate the stone, and the original was soon moved to the British Museum, where it has been kept since. It is the museum’s most popular attraction, although debates between the French, British and Egyptians continue to persist over which country should possess the stone.

After the fall of the Egyptian empire in 30 BC, hieroglyphics became a lost language. For centuries scholars had struggled to translate them. However, due to the Ancient Greek translation featured on the stone, the Egyptian parts of the stone were able to be translated at least partly. The Greek and Demotic parts of the stone were translated relatively quickly, but the hieroglyphic section proved to be more difficult.

In the 5th Century AD, a priest named Horapollo made a translation of more than 200 hieroglyphics. However, he was incorrect in many places, and this impeded scholars trying to translate the language for many centuries. British scholar Thomas Young and Frenchman Jean-Francois Champollion competed to become the first to crack the meaning of the hieroglyphics on the stone.

Young was the first to make good progress, identifying proper nouns such as Ptolemy by 1814. However, due to his usage of Horapollo’s incorrect translations, he couldn’t fully decipher the decree and eventually gave up, although he published his incomplete work. This helped as the foundation of Champollion’s attempt to translate. Champollion realised that hieroglyphics were not based solely on symbolic meaning, as thought by Horapollo and Young, and instead had some phonetic letters as well. This realisation helped to pave the way for Champollion’s deciphering of the stone in 1822. Due to slight differences between the languages on the stone as well as the various missing areas, no definitive translation of the stone has been made. However, it has proved extremely useful in learning and understanding more about the ancient Egyptian language and culture.