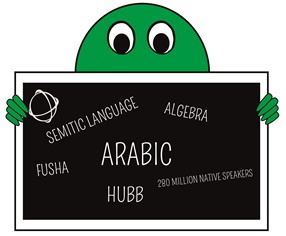 Arabic is one of the world’s most spoken languages, with over 280 million native speakers. It’s therefore no surprise that we often receive requests for translation into Arabic. It is not confined to one country either; it is the official or co-official language in 22 countries, mostly in the Middle Eastern and Saharan African regions, although regional dialects can differ quite greatly.

There are many things that set Arabic apart from other languages. For example, Arabic does not actually consist of an alphabet – instead, it is an abjad. An abjad is a writing system that does not contain vowels – it is made up of consonants, leaving the reader to supply the appropriate vowel. Also, of course, the letters themselves bear little resemblance to the ones used in English or other western European languages. It is part of the family of Semitic languages alongside languages such as Hebrew, Aramaic and Maltese. It is also a very old language – its earliest forms can be traced back 1,500 years. There are two main forms of Arabic. These are classical Arabic (known as Fusha), which is the language of the Qur’an and used in official circumstances, and Modern Standard Arabic, which is more commonly used in everyday life. Another reason it is different to many western languages is that it is written from right to left. It is the official language of Islam, and the holy book of Islam, the Qur’an, is usually written in Arabic. Because of its usage in Islam, over a billion Muslims have some level of understanding of the language.

Arabic has contributed many words to English, such as algebra (thanks for that one!), sugar, alcohol and coffee. If a word in English begins with ‘al-‘, there is a decent chance it descends from Arabic. Arabs and Europeans have had contact since around 600 AD. Often this was through wars such as the Crusades or when Muslims ruled over Spain. In times when a city of 10,000 Londoners still used the River Thames as a sewer, the Arabic city of Cordoba in Spain had over half a million citizens, running water and even street lighting. Arabic countries were also some of the world’s most advanced and civilised nations in the Middle Ages. They had exciting inventions and ideas hundreds of years before Europeans. These ideas include a system of mathematics quite similar to our modern one – medieval Arabs invented the concept of the number zero. They were also very advanced in terms of medicine, finding out about blood circulation 400 years before the West. There was a high level of education, with the world’s first university being founded in Egypt in 970 AD.

Arabic in the Modern Age

Nowadays, however, Islam and the Arabic-speaking world conjure many negative connotations in the minds of westerners. The Arabic region has been ravaged by wars in nations such as Iraq and Syria, and dangerous terrorist groups have sprung up. Sadly, this has led to a large rift between the west and Arabic countries. There is a level of unnecessary fear shown by some westerners towards Arabic, mainly due to its usage in Islam. While some terrorist groups masquerading as Muslims do use Arabic commonly, Arabic itself is a beautiful and complex language that does not deserve its current reputation. For example, Arabic has 11 words for ‘love’, with the most common, ‘Hubb’, having the same root as the word for ‘seed’, which links to love as it can grow into something beautiful – a rather poignant metaphor.