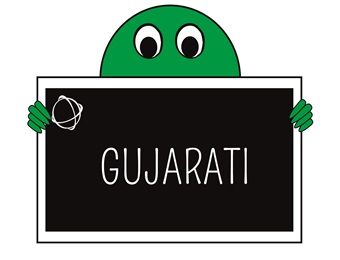 Gujarati is the language spoken in the state of Gujarat in western India. Around 50 million people speak Gujarati, making it the eighth largest language in India in terms of native speakers. There is also a small Gujarati population found across the globe, in countries such as the UK, the USA and East Africa. The father of the modern Indian nation, Mahatma Gandhi, was a native Gujarati speaker, as was the father of Pakistan, Muhammad Ali Jinnah.

Like many of the languages spoken in northern India, Gujarati descends from the ancient language of Sanskrit. This makes it an Indo-Aryan language. Other Indo-Aryan languages that still exist today include Hindu, Punjabi and Bengali, and Gujarati shares some similarities with these languages. Gujarati appeared in its earliest distinct form in around 1100 AD. This was known as Old Gujarati, and was similar to Rajasthani. Gujarati was first spoken by the Gujar people of central and western India. By around 1500, Gujarati and Rajasthani had begun to become distinct, and by the 19th century Gujarati had developed into a similar language to today. Areas of south-eastern Pakistan, particularly the province of Sindh, had a large Gujarati-speaking population. Muhammad Ali Jinnah, the man who is credited as the founder of modern Pakistan, was born in Karachi and had Gujarati as his mother tongue. However, after the partitioning of Pakistan and India in 1947, the number of Gujarati speakers in Pakistan decreased in favour of Urdu. The Gujarati script is formed of an abugida, which places consonants and vowels as one unit, with vowels being necessary but secondary to consonants. Similarly to Hindi, it uses a variant of the Devanagari script.

As with almost any Indian regional language, many modern words in Gujarati are either lifted directly from English or varied slightly. A language which has also had a big influence on Gujarati is Portuguese. The Portuguese ruled over Gujarat and other areas of western India before the British. Some of the many words which have made their way into Gujarati from Portuguese include ‘ananás’ (pineapple), which sounds like ‘anaanas’ in Gujarati. ‘Aia’ (nurse) is said as ‘aayaa’, and ‘pão’ (bread) is pronounced in Gujarati as ‘paaun’. There are a few English loanwords, such as ‘kabaat’ (cupboard) and ‘tuvaal’ (towel).

Gujarati natives have played important parts in Indian life, especially politics. As previously mentioned, both Mahatma Gandhi and Muhammad Ali Jinnah hail from Gujarati-speaking areas, although Jinnah preferred using Urdu for most of his adult life. The first Indian deputy prime minister, Vallabhbhai Patel,  was a Gujarati native. Current India Prime Minister Narendra Modi is also from Gujarat, and served as the Chief Minister of Gujarat for nearly 13 years before becoming prime minister. Indian cricketers who hail from Gujarat include Ravi Jadeja, Cheteshwar Pujara and Hardik Pandya. The influential Tata family, who own the global Tata conglomerate, also come from Gujarat. The late Princess Diana was also believed to be partly of Gujarati descent.