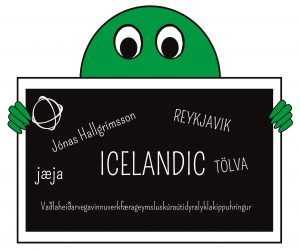 Requests for translation into Icelandic may not be as common as other translating or interpreting quotes we are asked for. But given the size of the country, population wise, we do get a proportionately high level of Icelandic translations, particularly from international businesses. In light of recent struggles Google Translate have faced for Icelandic translation, there has been much in the press about the potential demise of this beautiful language. It is imperative we (as a planet!) protect this ancient language. Let me tell you about it and why I have fallen in love with Iceland, its language and its heritage.

Before I begin, if you’re going to learn one Icelandic word, it should be “jæja”. Icelanders use the word jæja all the time. It means ‘well’, ‘okay, so…’, or ‘alright, shall we go’.  It is pronounced “yiy yah” Like “Hiya” but with a ‘Y’. A simple “jæja” is often all you need to say.

Jæja, in researching the native language of Iceland I have realised that this language is incredibly strong, historical, inventive, creative, pure and celebrated. Literally celebrated (more of that later). There isn’t a huge demand for translation into Icelandic or Icelandic interpreting in the UK, yet this language is fiercely protected by its nation. It only became “the official language in Iceland” in 2011 in an Act passed by Parliament.

Here are some bitesize numbers and facts – the juicier bits are further on.

OK, Icelandic is one of the Scandinavian languages that forms a branch of the Germanic languages. It is part of Indo-European language family. 330,000 people speak Icelandic. In total. On earth. Unsurprisingly, the vast majority of this figure, about 320,000, live in Iceland.  60% of whom – 192,000, live in the capital, Reykjavik. So, 58% of the entire Icelandic speaking population live in the capital of the language’s native country. That may not mean much, but to put this in context, 400 million people speak English as their first language worldwide. 8.536 million using English as their first language live in London – that’s only 2.2%. And it’s safe to say that English, as a language has been diluted, evolved, mutated and expanded as it has stretched its tendrils  globally. English is not even the same language it was 1000 years ago. That is almost unrecognisable. You only have to look at the poem “Beowulf” or read some Chaucer – it’s all Greek to me. Except it’s English. Or at least it’s Old English.

In contrast, the Icelandic language remains unchanged from ancient Norse. That means 1,000-year-old texts are still easily read (unlike Olde English and our friend Chaucer). Old Norse, the language of Vikings, was brought to Iceland from Norway in the 9th century and has many features in common with old English due to Viking invasion of Britain in the 9th century. What makes Icelandic stand out from the other Scandinavian languages is its purity. Iceland, being insular and isolated, has not been influenced by neighbouring countries in the same way the other countries have. But in the 18th century with the advent of modern ideas and new inventions that the world was embracing together, international words were being born.  Icelanders were faced with two options – to adopt foreign words (like the French and the English had), or develop their own words. A movement was started in the 18th century to secure an absence of these international words.

Icelanders opted to get creative and coin new expressions themselves. Icelanders have been amalgamating words to create one word centuries before we started saying Brangelina or skort (that’s a skirt that is also shorts btw). For example, the word “computer” obviously did not exist in Ancient Norse (or even Old English, for that matter) so a new word was to be created – tölva. This new word is a hybrid of tala (number) and völva (witch). So the literal translation of a computer in Icelandic is ‘a numbers witch’. Another great example of word upcycling is the Icelandic word for telephone. If you look on the internet for other languages’ translations of these words, most are clearly recognizable, but the Icelandic word for telephone is sími, which is an old Norse word for thread or wire. Icelanders have formed language committees to continue to revive old words and recycle them in modern usage thus protecting its heritage and staying pure.

Despite the movement to keep the language pure, Icelanders understand the importance of learning multiple foreign languages. Both English and Danish are compulsory learning for children in Iceland.  The fact that Icelandic has prevailed for as long as it has, illustrates just how important the language is to the overall identity of this small nation.

In Icelandic you can create longer of words by joining 2 words, or 3 or 4. Or even 23 words as is the case in the longest word in Icelandic. Here goes:- “Vaðlaheiðarvegavinnuverkfærageymsluskúraútidyralyklakippuhringur” (Try saying it out loud). The meaning of the word is: “Key ring of the key chain of the outer door to the storage tool shed of the road workers on the Vaðlaheiði plateau”. You could easily lengthen the word by adding a key colour for example.

More commonly (and more easily pronounced) would be “apple tree”. The Icelandic word is “eplatré” which is a conjunction of “epli” and “tré”.

There are no surnames or family names in Iceland – Icelanders use the traditional Nordic naming system, which includes a last name that is comprised from their father’s (or mother’s) first name with the addition of -dóttir (-daughter) or -son.

That would make me Anna Nigelsdóttir and my brother Guy Nigelsson.

Despite the fact that Iceland was one of the last places on earth to be settled by humans, it had the first democratically elected female and openly gay Prime Ministers and it does not have an army, navy or air force. To me, evolution seems a lot faster in Iceland than anywhere on the planet!