Pimms, strawberries and cream, drizzle, and a baffling scoring system – what’s not to ‘love’ about Wimbledon?

Dodgy puns aside, this year marks the 128th anniversary of the prestigious tennis event, with enthusiasts flocking from far and wide to be part of the oldest tournament of its kind. 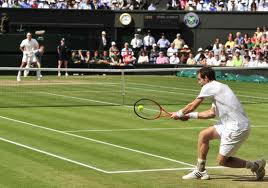 A sport which has retained its popularity over centuries, the exact origins of tennis are disputed, with some historians tracing it back to Ancient Egypt. However, it seems that the first real attempts at recording the sport’s history date back to medieval Europe in the 12th century, and more specifically to France, where monks introduced the first form of the game by hitting a ball against the wall with their bare hands. From monasteries to the royal courts of France, tennis gradually grew into an international phenomenon, yet these French roots have left their mark in terms of the linguistic history of the game.

Perhaps the most recognised entry when it comes to tennis vocabulary, zero or nil is expressed by the word ‘love’, the usage of which still remains a bit of a mystery. A popular theory is that it links back to the French word for ‘egg’ (oeuf), since the egg’s shape echoes that of a zero. The French expression could therefore have been changed to ‘love’ after the game reached British soil and the original ‘oeuf’ was mispronounced, or there are claims it could even have been adapted from the English expression ‘to play for love (of the game)’ – or in other words, to play for nothing.

Other examples of the Francophone influence include the word tennis itself which is said to have its origins in the French medieval era and ‘tenez’, the French imperative of the verb ‘tenir’ (meaning to take, receive or hold), as well as ‘deuce’ (derived from the French expression ‘À deux le jeu’, meaning ‘The game is shared’).

Rainy weather will never stop play for Atlas (and we’d never have to call on Cliff Richard to save the day).

We’re committed to matching your requirements with the best person for the job, so don’t lose points with your translation and give Atlas a call on +44 (0)1727 812725 or email team@atlas-translations.co.uk.