In its 150 year history Alice’s Adventures in Wonderland has been translated into 174 languages (in varying dialects). This includes every major language, a number of minor ones, some languages that are extinct and at least one that is invented.  From Japanese, Korean, Arabic, to Emoji. Yes, really. We have arrived at a place where texts can be translated into this invented language. 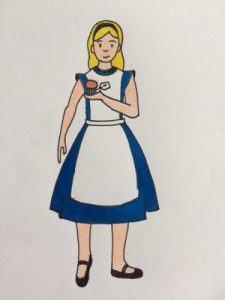 This 27,500-word novel has been translated into a text of 25,000+ emojis and formatted on to a super-sized emoji poster.

The story’s cultural interpretations and challenging linguistic idiosyncrasies are testament to this wonderful, highly visual piece of story-telling with an appeal crossing continents. Within the book itself is the nonsense poem written in an indecipherable language and yet, YET successfully translated. No, me either. Jabbawokies aside, it is a wonder that this book was translated at all given the complicated wordplay, puns and double meanings or homonyms (words that sound the same but have different meanings). Translating these books could be described as a linguistic nightmare, but conversely due to the challenge, it became a linguist’s dream-come-true.

Language scholar Michael Everson remarked that “The Alice challenge seems to be one that people like because it’s really fun,”. It separated the men from the boys in translation terms. Emer O’Sullivan, an expert in translations of children’s literature, says that the Mad Hatter’s tea party scene, with all its parodied verses, puns, nonsense and linguistic jokes, is a particularly good test of a translator’s skills and creativity.

In 2015 an ambitious project studied the many translations of Alice in Wonderland. This comprised three volumes, containing essays by 251 writers, whose sole purpose was to analyse the translations of this book. In doing so, they offered anecdotes that highlighted the peculiarities of language and culture. This work was accompanied by an exhibition in New York. Here it was claimed that this was the most extensive analysis ever of one English-language novel in so many languages. You can see why this blog cannot do the novel and its associated study of the translations justice.

In the unlikely event you haven’t read Alice in Wonderland (or indeed seen the film adaptations of which there are many), here is a bit about the story and the back-story. First of all, Alice’s Adventures in Wonderland, commonly known as Alice in Wonderland was written in 1862 by English mathematician Charles Lutwidge Dodgson, under the pseudonym Lewis Carroll. It tells the story of a seven-year-old girl named Alice (based on an actual girl; the daughter of a colleague) who falls down a rabbit hole. Alice (the fictional one, not the colleague’s daughter) falls into fantasy world called ‘Wonderland’. Here she comes across myriad fanciful characters, bizarre adventures and psychedelic scenes.

There have been frequent suggestions that the book contains thinly disguised references to drugs. However there is nothing to indicate that Carroll was indeed a user. The book has also been described as an innocent story cataloging the adventures of a young girl. These adventures are said to represent different stages of growing up.

It has even been suggested that Carroll’s day job as a mathematician found its way into the book, which satirizes the ‘new-fangled’ mathematics that was emerging at the time. Carroll, a very conservative mathematician, perhaps felt these new branches of mathematics were ridiculous compared to the algebra and Euclidean geometry he favored. I would love to dissect the mad-hatter’s riddles to highlight this point. But I stopped my own mathematical advancement somewhere around long division, so these references are totally lost on me. Drinking stuff that made me feel disorientated and clumsy is far more familiar.

So, whether or not this is a book about growing up and the challenges one faces, or if it was some coded message about hallucinogenic drugs or just a big reference to fancy new maths, it was and still is a great story. And has been translated into Emoji!

I even had a cat called Alice.