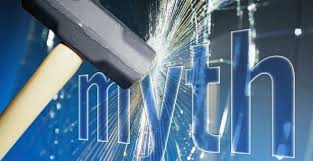 I am often surprised at the amount of misconceptions and wrong ideas that people have about the translation industry and translation in general. Let’s have a look at some of the most common assumptions being made about this line of work and debunk some translation myths.

Myth: Bilingual people can translate between their languages in any direction.

Truth: Being bilingual is not enough to become a translator. It takes time and dedication to master the necessary skills required to translate accurately. The vast majority of translators only work in one direction: from the source language into their mother tongue. There are very few translators who can easily translate both ways. Even in the case of bilingual people, they will, undoubtedly, feel more comfortable with one of the two languages and will usually translate exclusively into that language.

Myth: Interpreters and translators do the same thing.

Truth: Even though there are similarities between the two professions, and some people are able to do both, they are nevertheless very different. Firstly, translators deal with the written word, while interpreting is about the spoken word – two very different things. A translator and an interpreter require different sets of skills and tools of the trade.

Truth: Absolutely not, or at least not in the near future. However clever this invention is, it is still automated, which means it will never be able to grasp the subtleties of a language, let alone idioms. What they do provide is a word-for-word translation, which, in the best case will help you get the gist of what the texts says, but more often than not it will be gibberish and nonsense.

Myth: There is no need for translation, everyone understands English.

Truth: Surprising as it may seem, about 78% of the world population do not speak English (either as their first or second language). That is too big a market to be ignored. Studies have shown that people are 82% more likely to buy from a website if it is in their native language. But it is not only about businesses. Legal contracts, letters, statements and other types of documents need to be translated if the parties involved do not speak the same language.

Myth: A translator can translate anything – from poetry to legal contracts.

Truth: Would you expect a heart surgeon to operate on your brain? I thought not. Well, just as doctors are highly specialised in their chosen field, so are translators. Some will focus on legal translation or may have financial expertise, whereas others will prefer literary translations. Beware of any translator who claims they can translate anything!

Myth: Back translation is the best way to check the accuracy of a translation.

Truth: Well, yes and no – it all depends on the type of text. Let’s look at two examples:

–          A literary text – in this case, the original document and the back translated one will never be exactly the same. A translation is not a mere word-for-word rendition of the original document. It will convey meaning, style and tone, making sure that the result will not read as a translation, but as a new text that reads naturally in the new language. Translation is not an exact science, it borders art

–          However, when the document to be translated is of a scientific nature, such as medical records, prescriptions etc., back translations are imperative. Pharmaceutical companies will always have everything back translated to make sure it has been properly translated, with nothing added or omitted

Myth: Translation is overpriced, so I’ll choose the cheapest supplier.

Truth: Pricing is a tricky matter. Quality comes at a price. You cannot expect the highest quality from anyone who charges a flat rate of 4p per word for any language combination, regardless of subject matter. They will most likely outsource it to an under-qualified “translator” who will run it through automated translation software, or they will do that themselves. The costs for you may seem low at first, but in the long run this can affect your business’ reputation, and once that is lost, it is very difficult to rebuild.

What other myths regarding the translation industry have you heard?